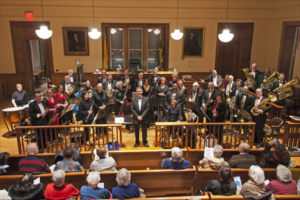 The Whitehouse Wind Symphony was founded by conductor emeritus Casey Bork in 1996, and is now under the direction of James P. Sheeley, Jr. Since its founding, the Symphony has grown rapidly, attracting experienced musicians as regular members from all over New Jersey, as well as New York City and eastern Pennsylvania. The group is now comprised of approximately 50 amateur and professional musicians who perform together regularly to enthusiastic audiences throughout Central and Northern New Jersey. The group holds weekly rehearsals on Tuesday evenings in the parish hall of St. John’s Episcopal Church in Somerville. The Symphony is dedicated to presenting the best in all varieties of wind band literature, especially pieces written or arranged for bands during the first half of the 20th century, widely recognized as the “Golden Era” of concert bands in America. The Symphony’s repertoire also includes popular tunes, Broadway show scores, marches from around the world, and selections written for and exclusively performed by the ensemble. On many occasions, the Symphony has performed selections written expressly for the band by current band members. Whitehouse Wind Symphony concerts are developed around a mix of themes that both challenges the audience as well as the players. The annual children’s concert and holiday concert series are two of the most highly anticipated events presented by the Symphony. Over the past few years, the Symphony has performed in Basking Ridge, Clinton, Flemington, Somerville, Union, and Whitehouse Station.