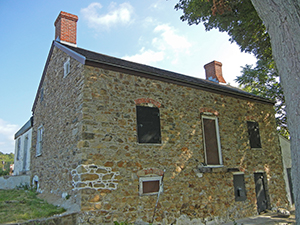 This unique stone farmhouse features rare architectural details and enables the telling of an important political story. The house combines German and English architectural elements. Its gable-end chimneys and center-hall plan are English, while its four rare ‘wattle and daub’ decorative ceilings are Germanic. During the American Revolution, its builder, Christoffel Vought and his son John opposed independence and led a group of loyalists from Hunterdon to join the British forces, for which the family farm was confiscated and sold. After the war the Voughts were exiled to Nova Scotia, then repatriated to the Albany area in the 1790s. This home contributes to the complex narrative of the American Revolution in New Jersey by bringing telling the stories of a family who actively resisted independence. The professional restoration of this house as a genuine mid-18th-century artifact began in early 2014. Public archaeology programs have located additional features that shed light on what life was like for the Vought family.